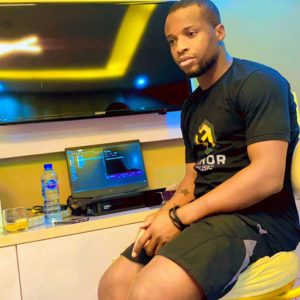 Lahor Music has taken a giant step in the quest to position itself as the heartbeat of Afrobeat music worldwide.

The recording company recently unveiled Idehen Osayande as the music personality who will be paddling the canoe of music activities of Lahor Music both in Nigeria and abroad.

Idehen Henry is an Afrobeat Music enthusiast who got involved in the music business many years ago after he graduated. Due to his passion for music, he got involved in music relationship with many young talent seeking to be heard in Nigeria’s music industry.

According to Osayande, he got into music business because of the influx of talented Afrobeats artistes around him as friends, his passion for their growth and success has been a major motivating factor for him.

After his new deal with Lahor music became successfull, Osayande took to his IG to announce the official unveil of the First Signed act of the label soon. posting a side-view image of himself and suspected yet-to be unveiled signee of Lahor music working together. He posted the photo with caption;

“All Is Set & About To Take Off With Our First Official Signed artist EP under @Lahor_music The Heartbeat Of Afrobeat Umbrella”.

Meanwhile, Idenhen Osayande has expressed his aspiration to make Lahor Music become one of the most talked about record label in the world while working with talented youngsters with something different to offer in the world of Afrobeat.

The goal is to make lahor music the most talked about and prominent record label in the world and also to help fish out and recruit young music stars that will wow the world with good music that goes down to the soul of the listeners.