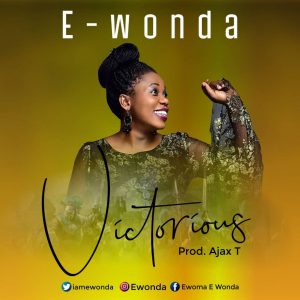 Ewomazino Veronica Dafe aka E-wonda, is a multi-talented woman. She is an amazing gospel music minister who has been around for over a decade.
She is very gifted with songwriting and ministrations.
She started her music career professionally in 2009 and has since then released 3 albums “OGHENE DOH” in 2010, “DOUBLE PORTION” in 2013, and “GIDIGBA” in 2016 including other singles such as “PRAISE THE LORD” in 2017 and “FOLLOW FOLLOW” in 2019 and now this new single VICTORIOUS 2021.
She won the Best Artist in Kaduna at the Gospellite Music Awards in 2016. She was also nominated as the best new artist at Music Entertainment Gospel Awards popularly known as MEGA Awards in 2016. She is also an actor, voice-over artist, and freelance broadcaster. There is so much to expect from this wonderful songstress E-wonda.
Download, Stream and share to enjoy victorious life produce by Ajax T.
Stream “Victorious” by E-wonda
UPLOAD YOUR MUSIC ON GHANALOADED.COM
CALL 08166345467
WHATSAPP :09018048673
Tags: victoriouswonda
Previous Post

Portable ft. Barry Jhay – All Eyes On Me