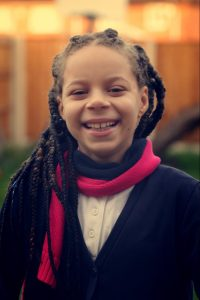 As a young kid who has over the years been displaying her music interest through video covers of hit songs emanating from Africa’s music scene, the decision to release her own song “Modupe” brought delight to her fans all over the world.
Modupe is a mid-tempo Afro-beat song delivered with the velvet and angelic voice of Mehcosa and of course her excellent song writing skills at a very young age is highly commendable.
It’s crystal clear that, with Modupe, 10-year-old British born Mehcosa has not just been doing covers of Afro-beat songs, she has been utilizing those songs to sharpen up her song writing skills in the African way.
The amazing aspect of the song is the way she’s able to blend together Yoruba language, Pidgin English and Queens English in her lyrics making the song very appealing to her Africa’s fan base without leaving behind her Europe fans.
However, the song Modupe by Mehcosa which is themed on appreciation to God Almighty is no doubt a perfect debut song for the 10-year-old British born Nigerian singer.
Meanwhile, many superstar artistes who have become Mehcosa fans from watching her sensational cover videos of their songs showed massive love towards her as she released her own song.
Celebrities like, Davido, Yemi Alade, Tiwa Savage, Burna Boy and a host of others took to social media to commend Mehcosa for a job well done on her debut track, “Modupe” while encouraging her to do more.
Also, the song, “Modupe” by Mehcosa sparked a lot of reactions from fans and music lovers all over the world as they expressed surprise at how Mehcosa was able to put together a fantastic song like “Modupe” as her debut track at age 10.
The song Modupe has gathered millions of streams across all digital platforms and still counting. Going by series of updates on her social media page, 2021 is going to be another big music year for Mehcosa – Watch Out For Her!!
Tags: britishchildexpectationsmehcosanigeriansingersurpasses
Previous Post