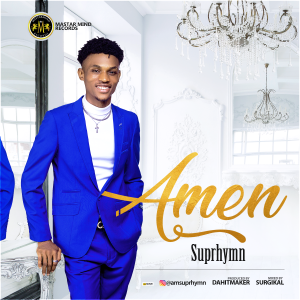 Christ Embassy Motivational/Gospel minister Suprhymn has released a new track titled “Amen“. The track was produced by Boy Sean [DaHitMaker] and coproduction from Suprhymn himself, mixed and mastered by “Surgikal”, the song expresses about the rain of blessings sent by God during trying times, and one should hold steadfast faith unto the grace of God in their daily activities of work, and be patient in their pursuit of glory and success and giving thanks and singing “AMEN”.

Samson Nkem Malife Popularly known as “Suprhymn ” born September 06 1998, is a motivational gospel singer, grew in Lagos and hails from the Eastern region of Anambra.
Started music professionally at the age of 18 as a rapper, focused on song writing which gave him edge amongst his pairs wrote his first song august 2016; at this time he participated in a talent audition which gained him the hearts of the audience and judges. He did a lot of rap freestyle with church friends. In October 2019 he started singing, mixing that with his rap skills which sharpened his art in song writing.
in 2020 he got a recording deal with Mastar Mind Records, a music label based in Lagos and home to Marcykeyz and Boy Sean.
“To me music is a means of ministration to the spirit of God’s children, and Jesus being the core truth of our message to the world” he says

Suprhymn can be reached @amsuprhymn on all social media platforms.