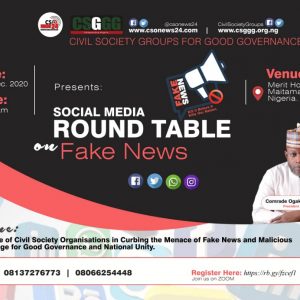 The Civil Society Groups for Good Governance, CSGGG has disclosed plans to host its 2020 roundtable workshop on fake news and malicious reportage.

President of the group, Comrade Ogakwu Dominic, in a press statement made available to newsmen on Friday, stated that the forthcoming event  themed: “The Role of Civil Society Organisations in Curbing the Menace of Fake News and Malicious Reportage, for Good Governance and National Unity”, will focus on breeding and cross fertilizing ideas on how best to effect a paradigm shift in the Nigerian social web space, from disseminating and trafficking fake news to trading credible, factual and accuracy in news reportage, as well as interpersonal social communications.

Ogakwu reiterated that fake news has been a deadly enemy to the nation, nonetheless the unity and peaceful co-existence of our nation can never be negotiable, he however enjoined Nigerians to embrace the need to verify information’s before publication to avoid conjuring issues that will cause chaos and threaten our national development.

The event which will be holding on the 17th of December, 2020 at the National Merit House Banquet Hall, Maitama Abuja, Time: 9;am, will however feature participants from different civil society groups in Nigeria, media stations, different brands, online bloggers, social media influencers and some government agencies.