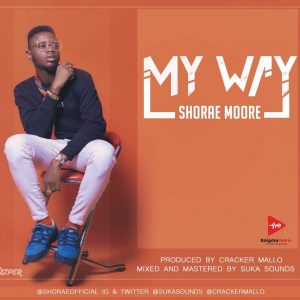 Adekunle Seyi Also know as Shorae Moore (Shorae for short) started off his career going by the stage name “Seyi Ade” which he released a cover of the talented D’ija’s “awww”. It’s been 24 months of tireless push for a better improved version of himself hence the re-branding and it is safe to say that the world is ready to meet and hear this multi-talented young man take the stage and fill their ears with his thoughts. Shorae who recently signed to EnigmaMediaINC is back with a new sound and to show his diversification in music with a new song titled My Way which was produced by Cracker Mallo, mixed and mastered by Suka Sounds.  A song that energizes then soul and ignite the idea sparks within. Great Tempo, Great Sound and Perfect Lyrics. Download and Enjoy