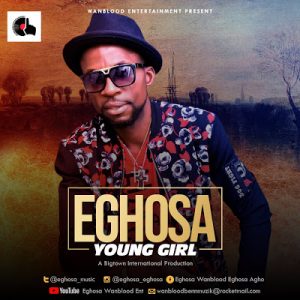 Love is not love until it is tested. A man can love a woman for any of a million reasons but he doesn’t get to choose the test that love has in store for him.

Eghosa has finally found a YOUNG GIRL of his dreams, the woman he’d like to spend forever with. But her father wants none of it, her toasters are not letting go and there’s an annoying clown in the picture that’s turning this love story into a nightmare.

How will Eghosa scale through this hurdle and pass the test of love?
Wanblood Entertainment act
Talented singer/songwriter tells his love story in this new video titled YOUNG GIRL. He reminds us that love is a beautiful thing and it’s worth fighting for.

The video was directed by Bigtown Pictures.