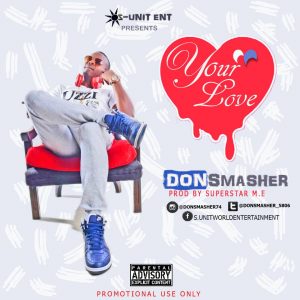 Ejimudo Dennis Chikadibia also known by stage name as” Don Smasher” is a Nigerian South Africa based song writer, a singer and a rapper. He is so excited today being 4th of December 2017 as he released his much anticipated official single titled “ Your Love” , this song was inspired as he was walking down the street thinking about the love of his life. This was not longer than 3 weeks he released “My SA Girl” a very hot dance hall that got his fans yawning for more. Owing to much excitement of his already sizable army of fans. He is strongly working on his album which shall be disclosed officially when to be ready. “Your Love” is a song that got fans thinking, it’s a very cool Afro Dance hall that you can enjoy at home, club etc.