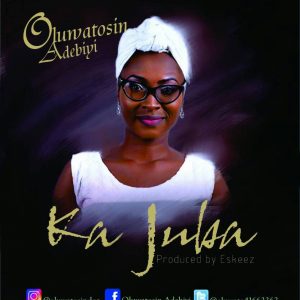 Oluwatosin Adebiyi is a young promising singer. She graduated from the department of Business Administration from the University of Lagos in 2014.

Her passion for Music was discovered from Childhood. During her stay in the University she served as Assistant Music Director in Her Fellowship (CELELAG) for two years (2012-2014) and the Choir launched its Maiden Album (IROYIN AYO) in her time.

Singing has grown from a passion to a calling as she pours out her heart while ministering to God and hearers.

Oluwatosin’s songs are mostly a fusion of the Yoruba and English languages. Here is her new single titled KA JUBA.