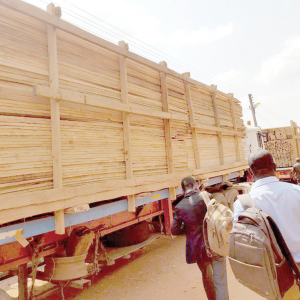 Trucks carrying assorted lumber, including the banned Rosewood, have been impounded by the Forestry Commission.

Nine trucks were seized in separate operations in the Eastern, Volta and Western regions.

The loaded trucks are currently parked at the Achimota Depot of the Forestry Commission in Accra.Speaking to the media last Friday, the Deputy Chief Executive of the commission, Mr John Allotey, said about 50 per cent of the trucks were carrying the banned Rosewood.

Rosewood is a finely grained timber used mainly for the production of very expensive furniture. It is also used for making chess pieces and musical instruments for which reason it is highly prized in Asian countries, particularly China.

China alone imports close to 96 per cent of all Rosewood lumber exported out of Ghana.

“We are sending a message to the illegal loggers that any lumber they bring into town would be intercepted on the road. We are, therefore, advising them to desist from the act. We are also admonishing truck owners not to rent their trucks to persons involved in illegal lumber trade because we will impound both the lumber and trucks,” he said.

According to Mr Allotey, the commission has also trained its officers on how to easily detect chainsaw lumber from the way it is processed.

That aside, he said the trucks were seized because the lumber did not have the required documentation.

“The Forestry Commission will start prosecuting offenders as a deterrent. We will make sure that those who bring in the lumber do not benefit from it. The trucks will be at the depot as long as the case is being prosecuted,” he said.

In recent years, harvesting of the species has gone out of control.

To curb the practice the ministry in 2014 banned the harvesting, transportation, export, sale or processing of Rosewood in the country, which mainly comes from the three northern regions.

The Ministry of Lands in August this year granted permit to 25 companies to salvage Rosewood from the Brong-Ahafo, Upper East, Upper West and Northern regions.

In a letter dated August 16, 2017, the Executive Director, Forest Services Division of the Forestry Commission, Mr Oppon Sasu, directed the selected companies to comply with the guidelines for the evacuation of lying logs, harvesting, processing and transportation of the Rosewood.

The companies are to strictly comply with 17 guidelines and regulations relating to the granting of timber rights and also pay all statutory fees and approval premiums.

However, Mr Allotey added: “Anybody who would cut down fresh Rosewood during the grace period would not have the right documentation.  The person will be arrested.”

He further warned that the commission would not spare any member of staff involved in the illegal practice.

“If the trucks are caught, we retrace their routes and apply the sanctions to those found to be culpable on the route,” Mr Allotey added.