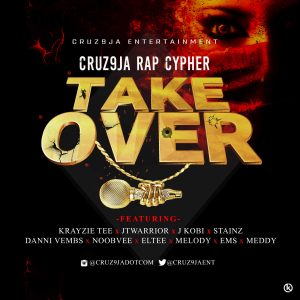 Cruz9ja Ent. sums up the best Rap act from the Middle Belt on a joint to deliver the Cruz9ja Cypher. The Rap Cypher which is laced with murder punchlines both in Tiv, English, Idoma and the various languages across the middle belt might sure get the host to jail after banging on the speakers of anticipating listeners as all the Rappers got the beat killed to further cement the murder. The Cruz9ja Rap Cypher titled ‘TAKE OVER’ which got 10 Top Rappers from the Middle Belt/North Central Features the likes of Krayzie Tee, J T Warrior, J Kobi, Stainz, Danni Vembs, Noobvee, Eltee, Melody, EMS & Meddy.