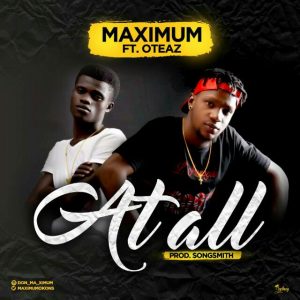 Maximum is one of the fastest uprising Artiste you can ever think off. He released his last song two weeks ago titled “TELL DEM” which can be gotten on Nigerian blogs or preferably from google, and now he has given us what is expected of him.
Maximum in his new song featured ‘OTEAZ’ who is also another upcoming artiste in the music industry. This song is titled “AT ALL”, where he decided to express him self on the way forward. This song was produced by “SONGSMITH”.

Maximum is not under any record label deal or contract, which makes him an independent artiste working through to pave the way for him self.
Download, Play, and Share Your View.

BUY Maximum Ft Oteaz – At All (Via ITunes)