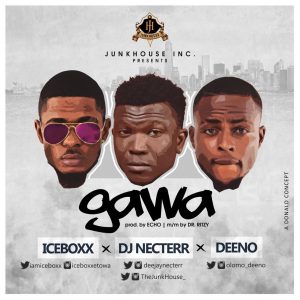 JunkHouse Inc, a 360 degrees Media and Entertainment Company established for the development, production, promotion and distribution of young African talent to the world; have signed new talents to join the music arm of the company.

They are; 20 year old singer and vocalist Deeno, Ace Disc Jockey, DJ Necterr, Talented Producer/Rapper 3ga [pronounced as Trigger]  and Ay Beatz, one of the hottest producers around. These artistes would join Rap Titan IceBoxx, who is already signed to the company.

Along with the Signing of artistes, JunkHouse Inc has also announced that a give-back project, a CD compilation called: ‘THE FUTURE PLAYLIST’ is in the works. This project is totally free for all budding artistes and the essence is to help up and coming artistes distribute their songs to over 6 states, 30 radio stations and 300 DJs within the South South / South East regions, if they take advantage of this project.

Also, JunkHouse Inc also announced that a collaborative album/ body of work tagged ‘THE EMPIRE LP’ that would feature all its artistes would be released before the end of the year and would be distributed globally. As part of preparations for its release, is the release of the first single off album, titled ‘Gawa’. The song features Iceboxx, DJ Necterr and Deeno and is produced by Echo.

JunkHouse Inc would like to thank our friends, Media, Disc Jockeys, promoters and our numerous partners for the support given to the company and its brand till date.

The JunkHouse crew from Calabar are back again, and this time, their track “Gawa” features IceBoxx, Dj Necterr & Deeno. The track is classic JunkHouse and by that I mean, everyone delivers. The record is produced by Echo, Mixed and Mastered by Dr Ritzy.

Get Familiar With Ghanaian Born Asia Based Singer Jaki