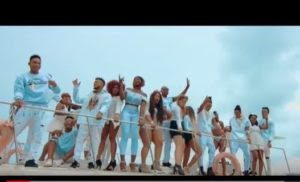 From the stable of hanny house entertainment present Singing duo, Cquenz ‘Enyim’ video explosion, Sequel to the release of their banger debut single entitled ‘Enyim’, Spanish-born Nigerian music duo, Cquenz release the official video for the single enyim ,which has garnered impressive reviews since its release.

The duo Destiny Johnson and Sylvester Okoh, made a debut into the Nigeria music scene in 2016 with the danceable tune and blazing hit song, ‘Enyim’ featuring ‘Ashi Master’ Xten Baba and produced by hit-maker Chibyske.the 20-year-old singers and songwriters who are based in Equitorial Guinea, have confirmed that their greatest influence is Psquare.

The stunning visuals are certainly a step in the right direction for the fast rising artistes. According to Cquenz, the video directed by Kelvin Richman is sure to be an award winning one as it has a classic banging beach-house, club-side feel to it. “We believe this video has what it takes to make it in the international market’.Watch it below and share your thoughts…